A fistful of fear

At the start of the Second World War, faced with the very serious threat of a German invasion, the British Government displayed posters in public places around the nation with simple morale boosting messages for the British people.

The messages were positive, strong and reassuring. They helped to unify the British people and galvanise the war effort.

Faced with the considerably smaller threat that ISIS poses to Australia, Prime Minister Tony Abbott has done just the opposite as he takes every opportunity to ramp up fear in the community.

His comment on the weekend that "As far as the Daesh [ISIS] death cult is concerned, it's coming after us" was just the latest instalment.

You be hard pressed to find a more non-reassuring and discomforting message from a leader. It was irresponsible in the extreme.

How long will it be before we see these posters blanketing our public places? 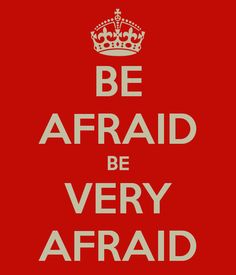 Posted by Andrew Catsaras at 10:50