Business? Mankind was my business.

Dateline: Australia, Federal Politics 2012.
In light of the issues being raised in the last few days, these insightful thoughts from the Kennedy brothers, John F. Kennedy and Robert F. Kennedy, about people and their inter-relationship with commerce are as relevant today as they were then - perhaps even more so. 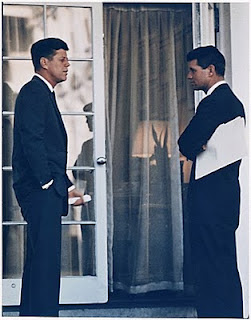 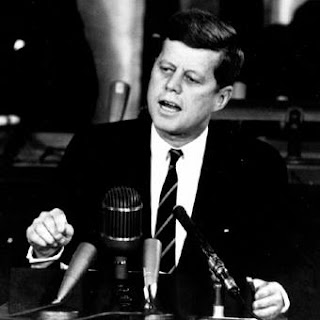 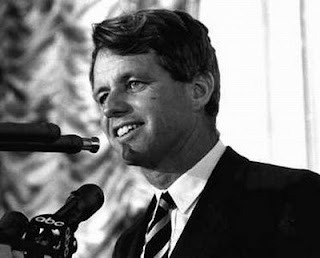 John F. Kennedy address to the Florida Chamber of Commerce, November 18, 1963:
I realise that there are some businessmen who feel only they want to be left alone, that Government and politics are none of their affairs, that the balance sheet and profit rate of their own corporation are of more importance than the worldwide balance of power or the Nationwide rate of unemployment. But I hope it is not rushing the season to recall to you the passage from Dickens' "Christmas Carol" in which Ebenezer Scrooge is terrified by the ghosts of his former partner, Jacob Marley, and Scrooge, appalled by Marley's story of ceaseless wandering, cries out, "But you were always a good man of business, Jacob." And the ghost of Marley, his legs bound by a chain of ledger books and cash boxes, replied, "Business? Mankind was my business. The common welfare was my business. Charity, mercy, forbearance and benevolence were all my business. The dealings of my trade were but a drop of water in the comprehensive ocean of my business!"
Members and guests of the Florida State Chamber of Commerce, whether we work in the White House or the State House or in a house of industry or commerce, mankind is our business. And if we work in harmony, if we understand the problems of each other and the responsibilities that each of us bears, then surely the business of mankind will prosper. And your children and mine will move ahead in a securer world, and one in which there is opportunity for them all.
John F. Kennedy address in Atlantic City at the Convention of the United Auto Workers, May 8, 1962:
Harry Truman once said there are 14 or 15 million Americans who have the resources to have representatives in Washington to protect their interests, and that the interests of the great mass of other people, the hundred and fifty or sixty million, is the responsibility of the President of the United States. And I propose to fulfill it.
Robert F. Kennedy address at the University of Kansas, Lawrence, Kansas, March 18, 1968:
Too much and for too long, we seem to have surrendered community excellence and community values in the mere accumulation of material things. Our gross national product now is over 800 billion dollars per year, but that gross national product, if we should judge America by that, that gross national product counts air pollution and cigarette advertising, and ambulances to clear our highways of carnage. It counts special locks for our doors and the jails for the people who break them. It counts the destruction of our redwoods and the loss of our natural wonder in chaotic sprawl. It counts napalm and it counts nuclear warheads, and armoured cars for the police to fight the riots in our cities. It counts Whitman's rifle and Speck's knife, and the television programs which glorify violence in order to sell toys to our children.
Yet the gross national product does not allow for the health of our children, the quality of their education, or the joy of their play. It does not include the beauty of our poetry or the strength of our marriages; the intelligence of our public debate or the integrity of our public officials. It measures neither our wit nor our courage; neither our wisdom nor our learning; neither our compassion nor our devotion to our country; it measures everything, in short, except that which makes life worthwhile. And it can tell us everything about America except why we are proud that we are Americans.
Audio of excerpt here:
Posted by Andrew Catsaras at 17:34