Seventy years on: Lest we forget John Curtin

Sunday, the 5th of July, will mark seventy years since the death of Australia's finest Prime Minister - John Curtin. He was 60 years of age.

General Douglas MacArthur said of him: "The preservation of Australia from invasion will be his immemorial monument." 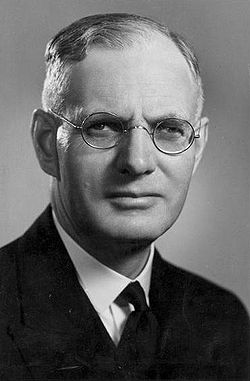 Excerpts from "A Great Australian Passes" by the Cinesound Review newsreel of his passing:

"John Curtin was a man of the people who had high authority thrust upon him at a crucial hour. His simplicity, honesty and unwavering purpose carried him to greatness and the whole world mourned his passing."

"He had seen the day break free of the clouds of tyranny in Europe; he was not spared to see the end of the war in which he, with all his mind and energy, had fought for Australia."

"We mourn him, and in mourning him we know such men in any nation's life are rare. 'Tis bitter truth, that only when they go, we realise the load they had to bear."

"Greater love hath no man than this, that a man lay down his life for his friends."

You can view the clip of the Cinesound Review newsreel on YouTube here:

An excerpt from an impassioned speech to the nation during the Second World War:

"The enemy rests upon its totalitarian basis. He uses everything!

This country, therefore, uses everything in resistance to him.

That means, clearly and specifically, that every human being in this country is now, whether he or she likes it, at the service of the Government to work in the defence of Australia.

I ask you to go without, for your pleasure or for your comfort, and to give what you can to the Government in the way of money, in the way of treasure, as a complete and immediate indication to the enemy that Australia will meet him: inch by inch, foot by foot, yard by yard, and that he shall not enter upon our country.

That all the advancing that will be done, will be by Australians. For it is Australians that stand for the policy of advancing Australia."

You can view the clip of that excerpt on YouTube here:

Some thoughts on his life:

"John Curtin shares with Pitt and Lincoln the tragedy of great reformers destroyed by total war. Curtin's greatness has been overshadowed by the magnitude of the events in which he played so crucial a part. The war itself, not Curtin's leadership, is the entrenched folk memory of the epoch; Churchill, Roosevelt and Macarthur, not Curtin, are its remembered heroes, even in Australia.

Only now, 27 years after his death, are his career and achievements beginning to be reassessed and rehabilitated. That reassessment will, I believe, increasingly emphasize the achievements of Curtin the reformer, not just Curtin the wartime leader. Had he lived, had the double burden of protecting Australia's front and his own back not taken the fatal toll, the true meaning of his career would never have been in doubt, because his contribution to Australia's postwar reconstruction and reformation would have been manifest. The foundations for that work were laid by the Curtin Government, and he himself shaped the work from the grave."  Gough Whitlam 1972

"Much has been said in recent times about the question of leadership. In the greatest crisis in our nation's history John Curtin brought to the leadership of this nation the supreme qualities of a genuine Australian leader.
There was about Curtin none of this studied image of simulated toughness, so-called. His real strength came from his deep inner resources of compassion, integrity and self-understanding.
He knew the real meaning of patriotism and love of country; and Curtin, the architect of the American alliance, never thought that loyalty to Australia first required loyalty to the government of another nation. Above all, John Curtin had the supreme quality of a national leader--the ability to unite.
In the aftermath of the Great Depression, Curtin was called to the leadership of this nation after a period of profound social, economic and political division. He never sought power by feeding division. He united his party; he united his cabinet; he united his nation."  Bob Hawke 1980

"Let it never be said that Australia has no heroes. How can that ever be truly said of a nation which produced John Curtin?
For he was an authentic hero, and a hero in a uniquely Australian mould.
His strength to make the terrible and lonely decisions of war came from a deep inner strength of spirit.
His mastery over the tremendous and tumultuous events of his time came from his mastery over himself.
His superb eloquence; his great political skills; his tolerance and forbearance towards the more turbulent of his colleagues; his clear grasp of fundamental Labor principles; his instinctive feel for the mood of the Australian people and his ability to relate to and to give expression to their higher aspirations-all these contributed to his tremendous achievements.
But the foundation of everything-the core and heart of the public man and the private man-was character, that inner strength of character which he had forged in the furnace of the hardest battle any of us ever have to fight-the battle over self.
As with so many of our chief figures throughout our history, there remains an essentially tragic element in John Curtin's life and career.
His was perhaps the most tragic-though nobly tragic-of all.
This was a man whose lifelong vision for his country was based on the ideal of peace and the brotherhood of man; but when he came to lead his country, it was in the middle of the most frightful conflict and carnage in human history.
A lifelong opponent of conscription, he had to bear the responsibility of introducing Australia's first conscription.
In the middle of the war, a Roosevelt could write to a Churchill: "What fun to be in the same decade with you." But for John Curtin, the time was out of joint, and a cursed spite had given him, literally, the power of life and death over thousands of his fellow countrymen.
And in the end, it killed him-a casualty of war as certainly as any who wore the Australian uniform.
Yet this essential tragedy-the tragedy of a man of peace who had to make war-cannot diminish his great achievements in the cause of Australian social and economic reform-the cause of social justice in Australia.
Indeed, those achievements shine with all the clearer lustre precisely because of the overriding preoccupation of saving the nation and winning the war.
Under the Curtin Government, the work of laying the foundations for the postwar reconstruction which has shaped the whole course of modern Australia right to the present day, went on side by side with the war effort."    Neville Wran 1981 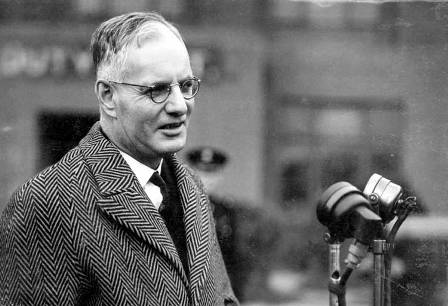 Seventy years on: Lest we forget John Curtin.

Posted by Andrew Catsaras at 16:16