A triumph for immigration

When the Socceroos played Iran in November 1997 at the MCG to qualify for the 1998 World Cup, it was the biggest occasion on home ground (at that time) for Australian Soccer. The crowd was 85,000.

A reporter asked Neville Wran, who was then the President of Soccer Australia, if this event was a great triumph for Australian immigration and multi-culturalism (referring to the fact that many of the players had come from immigrant families).

Wran, a man not accustomed to being caught off guard by a reporter's question, was taken aback. He stopped, paused, and then said that he'd never considered it in that way before, but, yes, he agreed with the reporter whom he acknowledged had made an insightful observation.

Unfortunately, the Socceroos only managed to draw the match causing them to miss out on qualifying, but the point still stood.

Today we are witnessing yet another triumph for immigration and multi-culturalism, but this time in the field of politics.

The two most senior Treasurers in Australia - Joe Hockey (originally Hokeidonian) and Gladys Berejiklian - are both from immigrant families of Armenian descent.

The Armenian community in Australia is estimated to be about 50,000, or 0.2% of the Australian population (fewer than the crowd at the MCG to watch that soccer match).

To have two of its number hold these vital ministries is a great tribute to them, their parents, the Armenian community and to immigration and multi-culturalism. 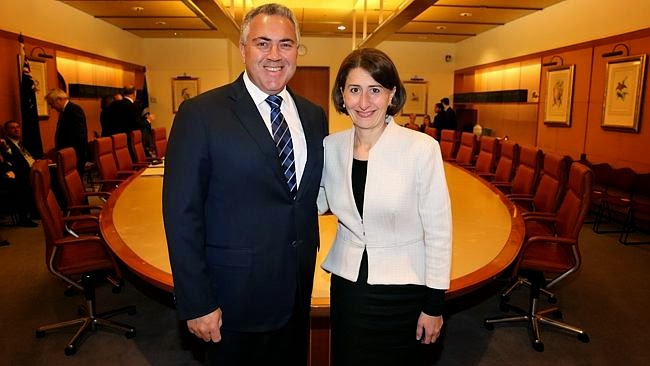 Posted by Andrew Catsaras at 12:43