What is government for?

What is government for?

Political parties employ pollsters and strategists, media advisers and spin doctors, to help them determine what government is for.

Most of that advice as manifested in politicians' utterances is, in my view, worth very little.

Here's some advice that I believe, if acted upon with sincerity, is worth a great deal.

President John F. Kennedy, May 8, 1962, in an address to the United Auto Workers: "Harry Truman once said, 'There are 14 or 15 million Americans who have the resources to have representatives in Washington to protect their interests, and that the interests of the great mass of the other people - the 150 or 160 million - is the responsibility of the president of the United States, and I propose to fulfil it.'" 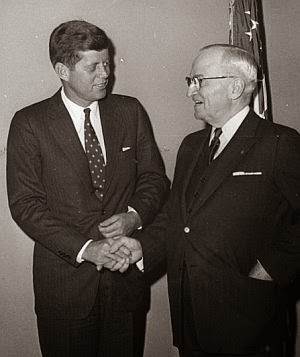 Something to think about?