Short and sweet too

Today's post is also short and sweet, but, again, feel free to smoke 'em if you got 'em.

On 17 December 1962 the ABC, CBS and NBC networks presented a one hour interview with President John F. Kennedy in prime time.  Yes, that's right, one hour in prime time, which was also carried by all major radio networks, called "After Two Years - A Conversation With The President". The interview was jointly conducted by Bill Lawrence of ABC News, George Herman of CBS News and Sander Vanocur of NBC News (who is still with us, aged 85) and was held in the President's office at the White House. 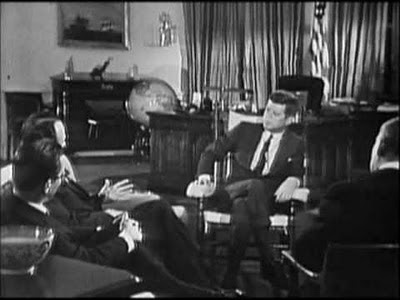 It's an interview I've referred to before because of the high quality of the questions and answers and the respect shown by the journalists to President Kennedy and the respect he showed to them and the audience.  Today it's this response to this question from Bill Lawrence that I wished to highlight as something to think about seriously for the incoming Government and Prime Minister.

Bill Lawrence: As you look back upon your first two years in office, sir, has your experience in the office matched your expectations? You had studied a good deal the power of the Presidency, the methods of its operations. How has this worked out as you saw it in advance?

President Kennedy: The problems are more difficult than I had imagined them to be. The responsibilities placed on the United States are greater than I imagined them to be, and there are greater limitations upon our ability to bring about a favourable result than I had imagined them to be. And I think that is probably true of anyone who becomes President, because there is such a difference between those who advise or speak or legislate, and between the man who must select from the various alternatives proposed and say that this shall be the policy of the United States. It is much easier to make the speeches than it is to finally make the judgements, because unfortunately your advisers are frequently divided. If you take the wrong course, and on occasion I have, the President bears the burden of the responsibility quite rightly. The advisers may move on to new advice.
Posted by Andrew Catsaras at 10:48