The Australian newspaper is fiddling the figures on company tax cuts

This is the opening paragraph in a story in The Australian newspaper today:

The bolding is my emphasis, nevertheless, for authenticity, I've left the font as the one the newspaper had used (Times New Roman - so my computer tells me).

However, the question didn't gauge support for the tax cuts, it only asked about timing, as you can see below. To conclude from that question that "a vast majority of voters" support the company tax cuts is more than misleading, it is outright wrong.

Sadly, every news bulletin I heard this morning reported that 63% (36% + 27%) of people support the company tax cuts.

So the public has been duped by a mischievous newspaper and overworked (to be charitable) or lazy (to be less charitable) newsrooms.

We do have recent research which gauged public support for the company tax cuts. It was conducted by Ipsos and published in the Fairfax press on April 6, 2018. 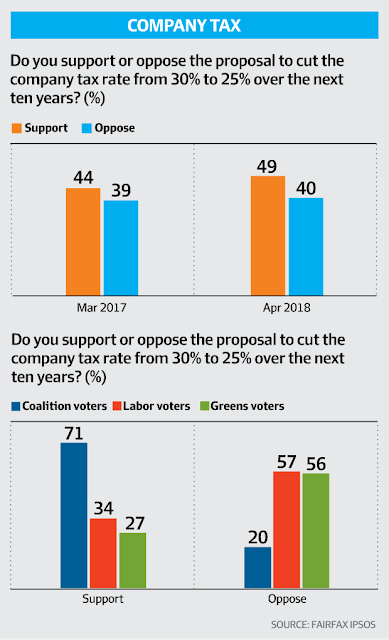 In my view, this is not a bad level of support for what, on the surface, might appear to be a very unpopular policy.

It illustrates how unnecessary The Australian's efforts were and only serves to further undermine the public's confidence in media reporting.

Posted by Andrew Catsaras at 10:40