"For of all sad words of tongue or pen, the saddest are these: it might have been" 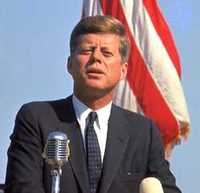 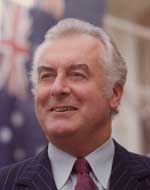 Spend a few moments to have a look at this collection of excerpts from John F. Kennedy's speeches, as well as reactions from Martin Luther King and Robert Kennedy to the assassination, to remember how much the world lost on November 22, 1963.

Together we shall save our planet, UN General Assembly, September 25, 1961

"We are confronted primarily with a moral issue.  It is as old as the scriptures and is as clear as the American Constitution.  The heart of the question is, whether all Americans are to be afforded equal rights and equal opportunities.  Whether we are going to treat our fellow Americans as we want to be treated.  If an American, because his skin is dark, cannot eat lunch in a restaurant open to the public, if he cannot send his children to the best public school available, if he cannot vote for the public officials who represent him, if, in short, he cannot enjoy the full and free life which all of us want; then who among us would be content to have the colour of his skin changed and stand in his place? Who among us would then be content with the counsels of patience and delay? One hundred years of delay have passed since President Lincoln freed the slaves, yet their heirs, their grandsons, are not fully free.  They are not yet free from the bonds of injustice; they are not yet free from social and economic oppression.  This nation for all its hopes, and all its boasts, will not be fully free until all its citizens are free."

Let them come to Berlin, address to one million citizens of Berlin, June 26, 1963

"There are many people in the world who really don't understand, or say they don't, what is the great issue between the free world and the communist world - Let Them Come to Berlin!"

Address to the Florida Chamber of Commerce, November 18, 1963

"I realise that there are some businessmen who feel only they want to be left alone, that Government and politics are none of their affairs, that the balance sheet and profit rate of their own corporation are of more importance than the worldwide balance of power or the Nationwide rate of unemployment. But I hope it is not rushing the season to recall to you the passage from Dickens' "Christmas Carol" in which Ebenezer Scrooge is terrified by the ghosts of his former partner, Jacob Marley, and Scrooge, appalled by Marley's story of ceaseless wandering, cries out, "But you were always a good man of business, Jacob." And the ghost of Marley, his legs bound by a chain of ledger books and cash boxes, replied, "Business? Mankind was my business. The common welfare was my business. Charity, mercy, forbearance and benevolence were all my business. The dealings of my trade were but a drop of water in the comprehensive ocean of my business!"

"Members and guests of the Florida State Chamber of Commerce, whether we work in the White House or the State House or in a house of industry or commerce, mankind is our business. And if we work in harmony, if we understand the problems of each other and the responsibilities that each of us bears, then surely the business of mankind will prosper. And your children and mine will move ahead in a securer world, and one in which there is opportunity for them all." 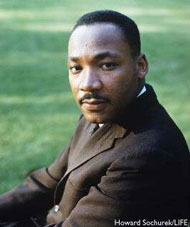 Journalist: "You have had attempts made on your life, and have been threatened perhaps tonight; what it is like to walk under this constant threat?"

MLK: "Well it's often difficult but when you live with it so long you almost become immune to being afraid as a result of these threats.  I guess you have to come to the point of looking at these things philosophically and this is where I have decided to stand:  I believe firmly this cause is right and someone must have the courage and the fortitude to stand up for it even if it means suffering, or even if it means death.  And I've always felt that America's suffering is redemptive and even if I have to die for this cause, or physical death is the price that others have to pay, then it is a price that is paid to free the soul of our nation and to free our children from a permanent spiritual death.  In this sense I think it is very redemptive, or it can be, even if it occurs."

Robert F. Kennedy made his first public appearance following the assassination of his brother (16 weeks earlier) on March 13, 1964 on the Jack Paar Show. 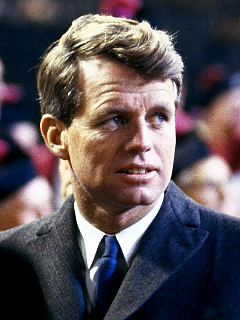 The emotional response from the audience to Robert Kennedy's entrance, in which they gave him a standing ovation, and the rapturous applause to his response to the following question, is indicative of the esteem in which they held his brother:

Jack Paar: "What do you think, sir, was your brother's greatest contribution?"

Also, he gave great confidence to people who lived in other countries, great confidence in the United States and its leadership that we were dedicated to certain principles and ideals and that we would live up them and, if necessary, fight for them.

I think it changed over a period of years our own feelings, as well as the feelings of other people around the world."
See Youtube link here

"I have some very sad news for all of you.....and that is that Martin Luther King was shot and killed in Memphis, Tennessee tonight.

Martin Luther King dedicated his life to love and to justice between fellow human beings.  He died in the cause of that effort.  In this difficult day, in this difficult time for the United States, it's perhaps well to ask what kind of a nation we are and what direction we want to move in.

For those of you who are black considering the evidence evidently is there were white people who were responsible, you can be filled with bitterness and with hatred and a desire for revenge.  We can move in that direction as a country and greater polarisation - black people amongst blacks, and white amongst whites, filled with hatred toward one another.  Or we can make an effort, as Martin Luther King did, to understand and to comprehend and to replace that violence, that stain of bloodshed that has spread across our land, with an effort to understand, compassion and love.

For those of you who are black and are filled and tempted to be filled with hatred and mistrust of the injustice of such an act against all white people, I can only say that I can also feel in my own heart the same kind of feeling.  I had a member of my family killed but he was killed by a white man.

My favourite poem, my favourite poet was Aeschylus, and he once wrote 'Even in our sleep, pain which cannot forget, falls drop by drop upon the heart, until in our own despair against our will comes wisdom through the awful grace of God.'

Thank you very much."

His brother, Ted Kennedy, gave the eulogy at his funeral:

"He gave us strength in time of trouble, wisdom in time of uncertainty, and sharing in time of happiness, he will always be by our side.

Love is not an easy feeling to put into words, nor is loyalty or trust or joy. But he was all of these.  He loved life completely and he lived it intensely.

My brother need not be idealised, or enlarged in death beyond what he was in life.

Those of us who loved him and who take him to his rest today, pray that what he was to us and what he wished for others, will someday come to pass for all the world.

As he said many times, in many parts of this nation, to those he touched and who sought to touch him 'Some men see things as they are and say why, I dream things that never were and say why not?'"

I often wonder what the world might have become had these three men not had their lives cut short.

"For of all sad words of tongue or pen, the saddest are these: it might have been" John Greenleaf Whittier.

Posted by Andrew Catsaras at 16:02