How well does Bill Shorten measure up?

The performance of Opposition Leader Bill Shorten has come in for a great deal of commentary recently, almost exclusively negative. 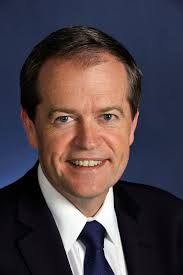 That's fair enough; as he aspires to be the Prime Minister and so should be subjected to a great deal of scrutiny. It's a rite of passage.

In keeping with that scrutiny, I thought it would be worthwhile to investigate what the polling data tells us about the impression he has made on the public since becoming Opposition Leader. 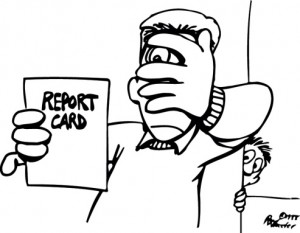 At a party level we know that the ALP has consistently led the Coalition on the two party preferred measure by an average of 5 points since December 2013, and at a personal level Bill Shorten has often led Tony Abbott as the Better Prime Minister (not an insubstantial achievement for an opposition that had recently lost government in a heavy electoral defeat).

However, these two measures are grading relative performance, where the voter is asked to choose between two alternatives and so the results for one are directly influenced by the perceived performance of the other.

To find out how Bill Shorten is seen in isolation we need to examine discrete measures, where he is being rated alone, then we can compare those ratings to Tony Abbott’s individual ratings to give us a cleaner comparison.

To do this, we can examine several measures that have been tracked over time since the 2013 Federal Election:

This index shows that since becoming Opposition Leader, Bill Shorten's score has ranged between 44 and 30 with an average performance rating of 37, which is a fair result.

However, most recently, his rating has fallen to its lowest level of 30 (not surprising given the publicity over his role in "The Killing Season" and his appearance at the Trade Union Royal Commission). How he responds to this difficult period will be crucial.

Nevertheless, set against Tony Abbott’s figures, which range from 47 to 29 with an average performance rating of 38, Bill Shorten's ratings are comparable.

On this measure he rates a Pass grade (5/10) with "you're slipping", “can do much better” and “needs to apply himself more” in the comments section of his report card.

(Click on any of the graphs to see an enlarged version) 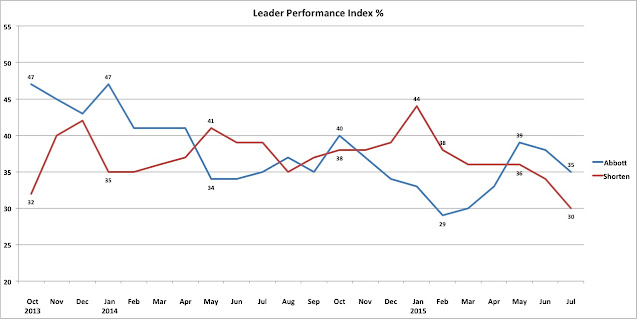 On this measure we have two attributes that were rated by the public: "A capable leader" and "Good in a crisis".

Bill Shorten has been consistently seen as a more capable leader than Tony Abbott, and has been viewed at least as good as Tony Abbott in a crisis.

This tells us that the public does not have significant reservations about his ability as a leader. 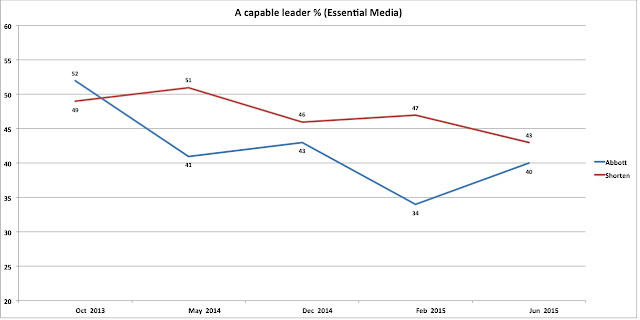 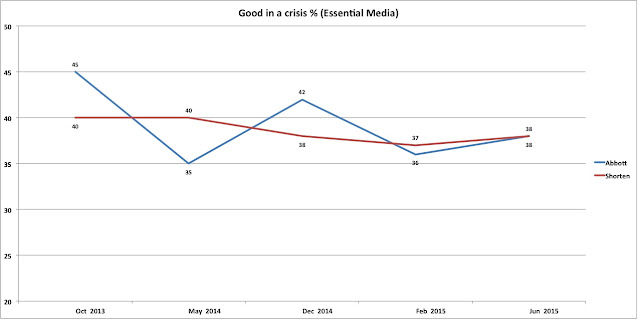 On this measure we have four attributes that were rated by the public: "Out of touch with ordinary people", "Understands the problems facing Australia", "Narrow minded" and "Intolerant."

On all four attributes Bill Shorten is viewed as being empathetic and far more so than Tony Abbott. 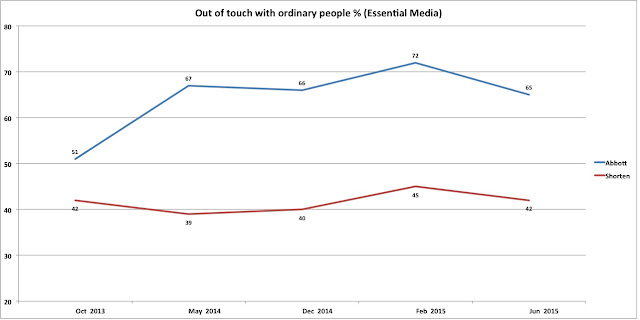 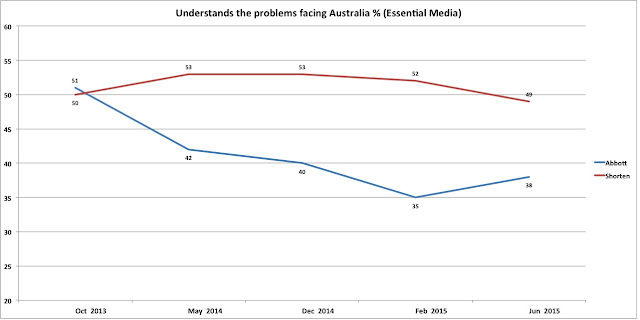 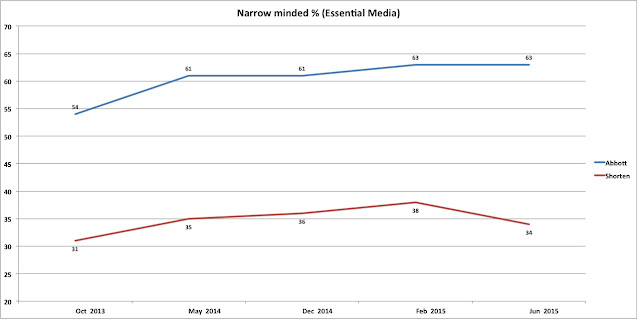 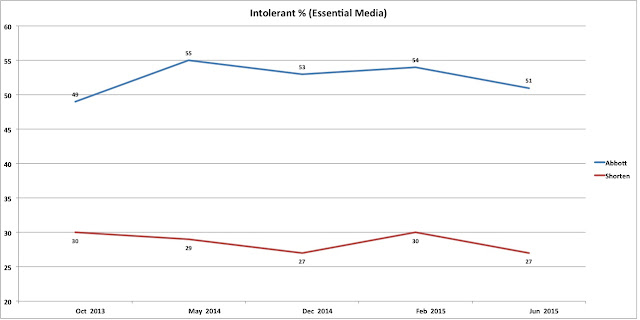 On this measure we have three attributes rated by the public: "Arrogant", "Erratic" and "Aggressive".

On all three attributes Bill Shorten is viewed as being rather moderate with an even temperament, and much more so than Tony Abbott. 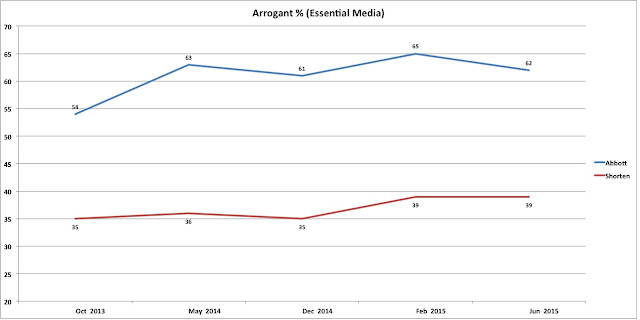 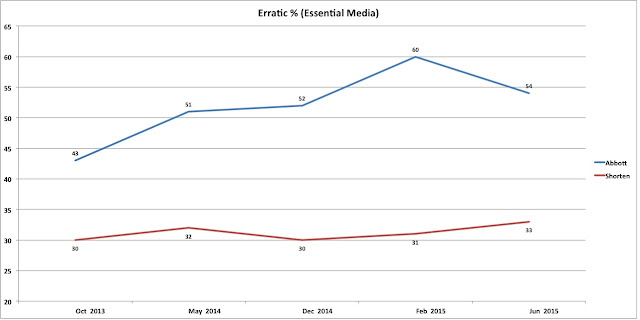 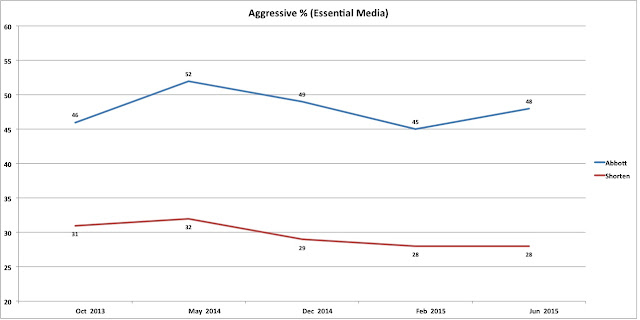 On this measure we have three attributes rated by the public: "Superficial", "Trustworthy" and "More honest than most politicians".

Bill Shorten is seen as less superficial than Tony Abbott, but rates similar to him on the two attributes of trust.

On this measure he scrapes through with a Pass Conceded grade (4.8/10). 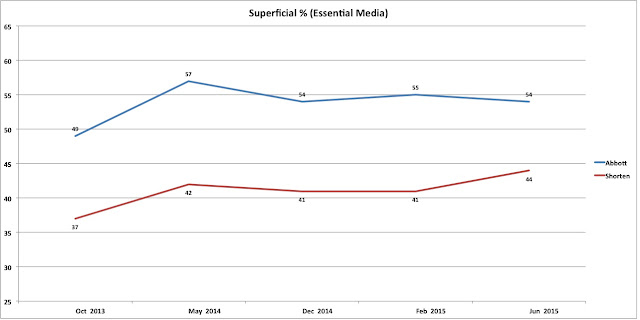 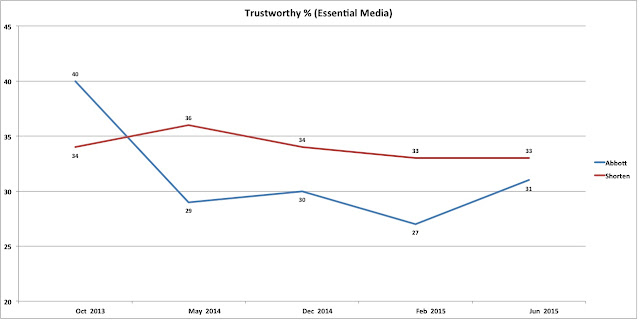 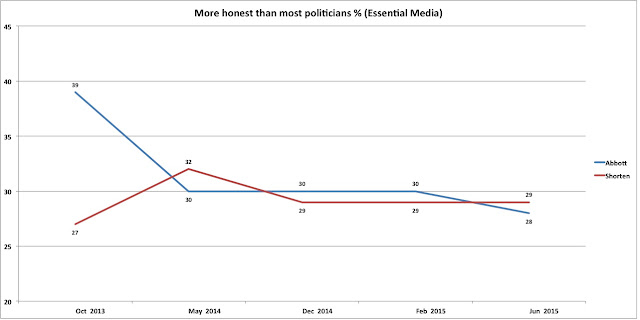 These research findings show that Bill Shorten's standing with the electorate to date has been quite acceptable and there's nothing to suggest there is any major impediment to him being seen by the public as a prime minister.

Bill Shorten's trustworthiness - thanks to his well-known role within the ALP during the leadership tussles between Julia Gillard and Kevin Rudd, the fact he admitted to lying to Neil Mitchell about his role in the latter of those challenges and the rebuke from the Royal Commissioner about his 'credibility as a witness' - is clearly a weak point for him (though he rates no more poorly than Tony Abbott).

Sadly, the public expects a fair amount of 'untrustworthiness' from their politicians. To suggest a politician tells lies is like saying a boxer throws punches or a journalist beats up a story. It's part of the trade and largely factored in by the public.

In summary, the research findings indicate that the public has fair to good impressions of him.

Based on the research data, his grades are:

While many, perhaps most, might find these results surprising, they could help to explain the Coalition's clear determination to damage and, if possible, destroy Bill Shorten's standing with the electorate.

The zeal with which they have taken to that task couldn't just be for the sport. 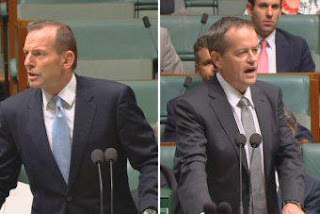 Posted by Andrew Catsaras at 11:41