Last week Malcolm Turnbull made the unremarkable observation that the threat from ISIS [Daesh] should not be overblown and that it was not akin to Hitler's Germany, Tojo's Japan or Stalin's Russia.

Following those comments Julie Bishop - who presumably believed they reflected poorly on her assertion that ISIS was the biggest threat to civilisation since the end of World War 2 - 'rebuked' Malcolm Turnbull saying: 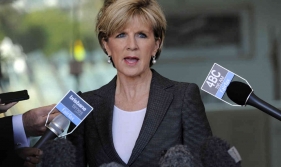 “My assessment is based on the classified briefings I receive as a member of the National Security Committee, and from my confidential discussions with counterpart foreign ministers and national leaders around the world.
“We are in the early stages of a struggle against an extremist ideology that many nations regard as an existential threat.
“The inherent constraint of the principle of ‘mutually assured destruction’ that applied during the Cold War has no bearing on the actions of extremists like Daesh.”
Nearly 52 years ago, on July 26, 1963, President John F. Kennedy told the American public, "A full-scale nuclear exchange, lasting less than 60 minutes, with the weapons now in existence, could wipe out 300 million Americans, Europeans and Russians, as well as untold millions elsewhere."

President Kennedy was being candid.

It was less than one year after the Cuban Missile Crisis (in which the United States and the Soviet Union came within a whisker of such a full nuclear exchange) the threat of the Cold War turning not only into a hot war but into an apocalyptic inferno that threatened the very existence of the human species, was very real and was actually being planned for (as explained in The Atlantic):

"The [U.S.] Joint Strategic Capabilities Plan foresaw the use of 170 atomic and hydrogen bombs in Moscow alone; the destruction of every major Soviet, Chinese, and Eastern European city; and hundreds of millions of deaths. Sickened by a formal briefing on the plan, Kennedy turned to a senior administration official and said, 'And we call ourselves the human race.'"
300 million people at least being killed (nearly four times the number killed in World Wars 1 and 2 combined) was being planned for.
Tell me again how the threat to the world from ISIS [Daesh] comes remotely within coo-ee of that.

Posted by Andrew Catsaras at 12:59