Freedom of the press

The fact that I feel compelled to keep making this point disturbs me greatly. But make it I will.

Two quotes regarding freedom of the press that should be displayed prominently, in very large type, in every newsroom and every office of every politician - federal, state and local.

The first is from President John F. Kennedy in December 1962:

Mr. Vanocur: You once said that you were reading more and enjoying it less. Are you still as avid a newspaper reader, magazine......I remember those of us who travelled with you on the campaign, a magazine wasn't safe around you.

THE PRESIDENT. Oh, it is. No, no, I think it's invaluable, even though it may cause you some.......it's never pleasant to be reading things frequently that are not agreeable news, but I would say that it's an invaluable arm of the Presidency, as a check really on what's going on in administration, and more things come to my attention that cause me the concern or give me information, so......I would think that Mr. Khrushchev operating a totalitarian system which has many advantages as far as being able to move in secret, and all the rest, there's a terrific disadvantage not having the abrasive quality of the press applied to you daily, to an administration. Even though we never like it, and even though we wish they didn't write it, and even though we disapprove, there still is......there isn't any doubt that we couldn't do the job at all in a free society without a very, very active press.
Now, on the other hand, the press has the responsibility not to distort things for political purposes, not to just take some news in order to prove a political point. Seems to me their obligation is to be as tough as they can on the administration but do it in a way which is directed towards getting as close to the truth as they can get and not merely because of some political motivation.
You can view him speaking those words on YouTube here:

The second is from Thomas Jefferson in 1786: 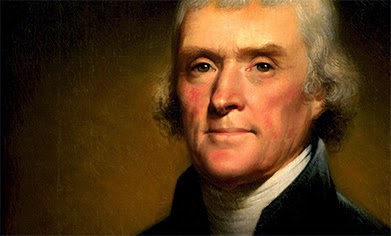 "Our liberty depends on the freedom of the press, and that cannot be limited without being lost."

Long after the temporary power of ISIS is gone and the term once again refers to an Egyptian goddess, the permanent power of these quotes will remain.

Posted by Andrew Catsaras at 16:33