I've been to the mountaintop.

Last week we witnessed an exceptional speech given by Noel Pearson at the memorial for Gough Whitlam. It led to discussions regarding other great speeches.

For mine, the most powerful speech I've seen was delivered by the Reverend Dr. Martin Luther King Jr. on the evening of April 3, 1968 called "I've been to the mountaintop".

He was assassinated the next day. He was only 39 years old.

Below is the transcript of the final section of that speech in which he prophetically speaks of his imminent demise and a YouTube link to him saying those words. 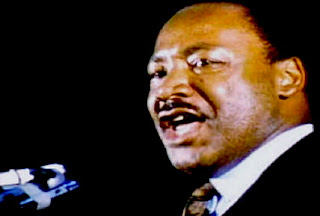 "Well, I don't know what will happen now. We've got some difficult days ahead. But it really doesn't matter with me now, because I've been to the mountaintop.

And I don't mind.

Like anybody, I would like to live a long life. Longevity has its place. But I'm not concerned about that now. I just want to do God's will. And He's allowed me to go up to the mountain. And I've looked over. And I've seen the Promised Land. I may not get there with you. But I want you to know tonight, that we, as a people, will get to the promised land!

And so I'm happy, tonight.

I'm not worried about anything.

I'm not fearing any man!

Mine eyes have seen the glory of the coming of the Lord!!"

"I've been to the mountaintop" full transcript and audio here.

Posted by Andrew Catsaras at 15:01