When the chickens come home to roost

This has been coming for years:

"New WHO report provides the most comprehensive picture of antibiotic resistance to date, with data from 114 countries
30 APRIL 2014 | GENEVA - A new report by WHO–its first to look at antimicrobial resistance, including antibiotic resistance, globally–reveals that this serious threat is no longer a prediction for the future, it is happening right now in every region of the world and has the potential to affect anyone, of any age, in any country. Antibiotic resistance–when bacteria change so antibiotics no longer work in people who need them to treat infections–is now a major threat to public health."

Article link from WHO is here:

And from a report in Scientific American:

Antibiotic Resistance Is Now Rife across the Entire Globe

“A post antibiotic-era—in which common infections and minor injuries can kill—far from being an apocalyptic fantasy, is instead a very real possibility for the 21st century,” wrote Keiji Fukuda, WHO’s assistant director general for Health Security, in an introduction to the report. The crisis is the fruit of several decades of overreliance on the drugs and careless prescribing practices as well as routine use of the medicines in the rearing of livestock, the report noted."

Most disturbing part of that article was this quote:

"To tackle the problem, the report calls for global, coordinated actions on the scale of those that nations are taking to mitigate and adapt to climate change."

Based on our track record of dealing with climate change, what chance do you think humanity will deal any better with this other human created crisis?

The Father of Medicine, and one of my forebears, Uncle Hippocrates said:

"There are in fact two things, science and opinion; the former begets knowledge, the later ignorance." 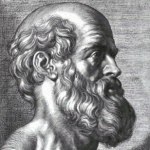 This is what happens when opinion and ignorance overwhelm science and knowledge.

Something to think about?

Posted by Andrew Catsaras at 11:04