While what is currently going on in Ukraine and Crimea is not Cuba 1962, it is worth reflecting on the words of the man who was at the centre of the Cuban Missile Crisis (October 14 - 28, 1962) and his warnings on misjudgements, and overblown rhetoric.

From "After Two Years: A Conversation With The President" 17 December 1962. 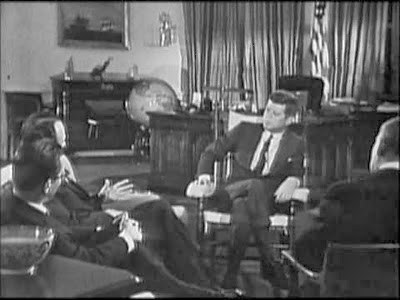 President Kennedy: "Looking back on Cuba, what is of concern is the fact that both governments were so far out of contact, really. I don't think that we expected that he [Nikita Khrushchev, the Soviet Premier] would put the missiles in Cuba, because it would have seemed such an imprudent action for him to take, as it was later proved. Now, he obviously must have thought that he could do it in secret and that the United States would accept it. So that he did not judge our intentions accurately."
"Well, now, if you look at the history of this century, where World War I really came through a series of misjudgments of the intentions of others, certainly World War II, where Hitler thought that he could seize Poland, that the British might not fight, and if they fought, after the defeat of Poland they might not continue to fight, Korea, where obviously the North Koreans did not think we were going to come in, and Korea, when we did not think the Chinese were going to come in, when you look at all those misjudgments which brought on war, and then you see the Soviet Union and the United States so far separated in their beliefs, we believing in a world of independent sovereign and different diverse nations, they believing in a monolithic Communist world, and you put the nuclear equation into that struggle, that is what makes this, as I said before, such a dangerous time, and that we must proceed with firmness and also with the best information we can get, and also with care. There is nothing--one mistake can make this whole thing blow up. So that--one major mistake either by Mr. Khrushchev or by us here--so that is why it is much easier to make speeches about some of the things which we ought to be doing, but I think that anybody who looks at the fatality lists on atomic weapons, and realises that the Communists have a completely twisted view of the United States, and that we don't comprehend them, that is what makes life in the sixties hazardous."

Posted by Andrew Catsaras at 10:32