Miss, that means that the Earth will get cancer and die

In 1973, when I was at school, I learnt two significant lessons that affected me so profoundly they have lived with me ever since.

It is a source of very deep sadness and interminable frustration that despite an avalanche of warnings from countless reputable authorities over several decades, too many of us still refuse to even acknowledge these lessons let alone act upon them, with predictably devastating results.

It illustrates quite starkly that human folly truly knows no bounds.

The first lesson - The perils of smoking.

One day, two nurses from the NSW Health Department came to our school to explain the dangers of smoking.

The nurses brought with them three lungs that had been sliced and pressed between two pieces of perspex.

The first lung was of someone who had never smoked. It was pink, perfect, quite thick and whole. It just looked healthy.

The second lung was of someone who had smoked for about seven years. It was pink, but it was pitted with small Swiss cheese like holes and looked thin in the body. It looked stressed. This person had the early stages of emphysema.

The third lung was of a chain smoker who had died of lung cancer. This lung was black, crumpled up, about half the size of the other two lungs and had a large white tumour attached to it. It looked very ugly.

It was clear, without the nurses having to say anything, what was in store if we decided to take up smoking. The evidence was absolute.

Now, at the time, we weren't familiar with any of the utterly contemptible propaganda that came from the tobacco companies about the 'tenuous links between smoking and cancer', but even if we were, we would have rejected their deceitful assertions for the scheming Goebbelsian garbage that it was. We had seen the results of smoking very graphically.

That day my sister (who had also seen the presentation in her class) and I, badgered our father who was a 'pack a day' smoker to give up. He had smoked on and off for about thirty years and his favoured brand at that time was du Maurier.

Our badgering, along with my mother's insistence that he "smoke those filthy things outside because they were stinking up the curtains", and his own realisation that cigarettes were not good for his health, led to him giving up within weeks. As a result, luckily, thankfully, he never suffered from any lung disorders for the remainder of his life.

I also explained what we had seen at school to my uncle who was a chain smoker. He smoked three to four packets a day and his favoured brand was Kent.

His response was simply to reject what I had said and told me that he knew "lots of old people who had smoked all their lives." He then added "Besides, I could get killed driving my car any day of the week."

He died in his sixties from lung cancer.  He was still in denial then, incredulous that all those years of smoking were responsible and still clung to his observation that he knew "lots of old people who had smoked all their lives."

Another I told of what we had seen at school was the mother of a friend of mine. She was a 'pack a day' smoker and her brand of choice was Craven A.

Her response was to barely acknowledge what I had said and just continued to do the ironing while watching TV. A few minutes later, she reached into her purse on the couch, pulled out some change and said to my friend "Luv, run down to the shop and pick us up a packet of Craven As."

We moved away from that suburb a few years later and I lost touch with my friend and his family. I've found out subsequently that his mother did eventually give up, about thirty years later, but she now also has lung cancer. Still alive, but barely.

It was just so obvious to we children - yes, children - when presented with the evidence that smoking was not good for you and would eventually kill you (and that was well before we knew about all the other bad effects of smoking, namely heart disease and a host of other cancers) yet the adults, other than my father (who was still somewhat reluctant) simply did not want to hear about it.

The second lesson - The Greenhouse Effect. 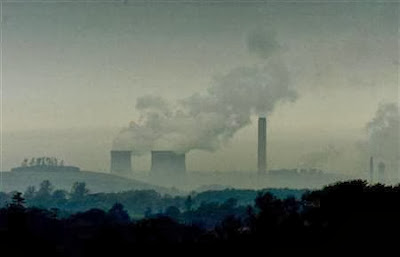 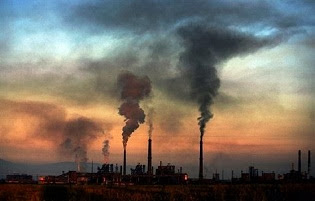 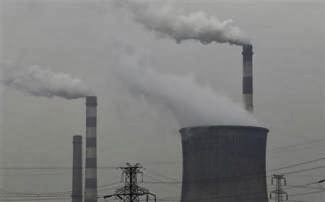 On another day, some months later, we were studying the effects that air and water pollution were having on the environment.

When we were discussing the effects of air pollution, this term the "Greenhouse Effect" was mentioned.

Now we all knew what a greenhouse was as we had recently visited the Royal Botanic Gardens in Sydney and it didn't take long standing inside one to see how the hot-house heated up.

It was explained how air pollution was increasing the amount of carbon dioxide in the atmosphere which began to blanket the Earth and because it was letting sunlight in but not letting as much heat out, it was acting as a massive global greenhouse - warming the planet. This we learnt was the Greenhouse Effect.

We understood implicitly that this couldn't be a good thing. We could clearly see what impact polluting the waterways was having at our local beaches, creeks and in Sydney Harbour; it didn't take much to appreciate what damage pumping smoke into the air would have. We had several factories in our neighbourhood, including W.D. & H.O. Wills (a huge manufacturer of cigarettes), and we could see daily the smoke billowing from their chimney stacks.

When our teacher asked what we thought could happen as a result of the Greenhouse Effect, one of my fellow students piped up and said, "Miss, that means that the Earth will get cancer and die."

"What do you mean?" asked our teacher.

"Well, we saw how smoking will give you lung cancer, so filling the air with smoke will also give the Earth cancer."

Out of the mouths of babes. 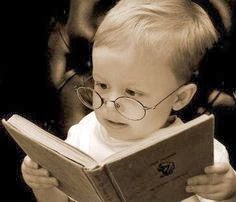 Do we listen to the IPCC and recognise that our current behaviour will lead to a shocking outcome - the climatic equivalent of seeing that putrid, cancer ridden lung and understand that it was smoking that caused it? Do we commit ourselves to changing our behaviour, doing whatever is required, to avoid that inevitable outcome - the climatic equivalent of quitting smoking by all and any means possible?  Do our leaders show true leadership and inspire their people, galvanising them into action for the benefit of their children, grandchildren and great-grandchildren - the climatic equivalent of any GP worth their salt working hard with their patient to help them quit smoking for the benefit of themselves and their family?

No, we don't do any of these things.

We either flippantly dismiss the IPCC findings as 'alarmist' and delude ourselves, using our vast scientific knowledge based on zero qualifications and seconds of ignorant thought, that such climatic changes are normal and have little or nothing to do with human activity - the climatic equivalent of knowing "lots of old people who had smoked all their lives"; or do so little about changing our behaviour that it will make next to no difference to the outcome - the climatic equivalent of smoking one fewer cigarette per day; or, most bizarrely of all, believe the whole phenomenon of climate change is a hoax perpetrated by communist conspirators eager to remove our individual rights and keen to see a 'world government' - this one is just so ridiculous that there is no smoking parallel.

In other words, we just continue to do the ironing while watching TV and sing out to future generations "run down to the shop and pick us up a packet of Craven As."

Meanwhile, at the Intergalactic Hospital, the Planetary Oncology Ward awaits the admission of patient planet Earth. 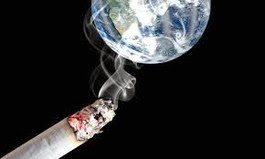 "The more things change, the more they stay the same." Jean-Baptiste Alphonse Karr.

Posted by Andrew Catsaras at 15:25