The horse that soothed a nation

Just over 40 years ago, on May 17 1973, The United States Senate Watergate Committee opened its hearings into the Watergate burglaries and the ensuing Watergate scandal.

It was at this hearing that Howard H. Baker Jr., Republican Senator from Tennessee, asked the immortal questions, "What did the President know, and when did he know it?" 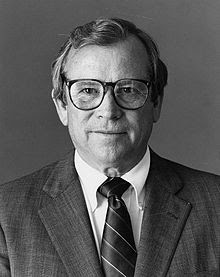 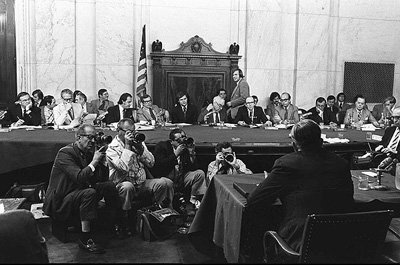 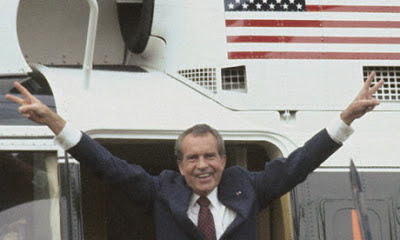 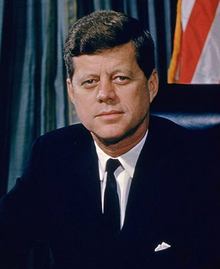 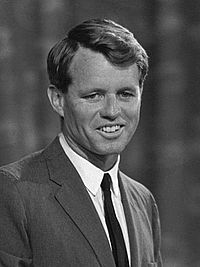 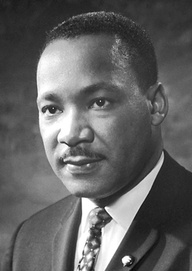 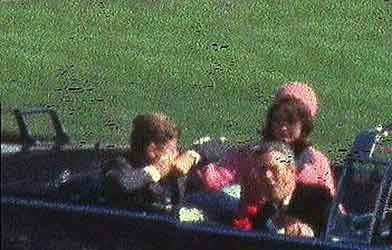 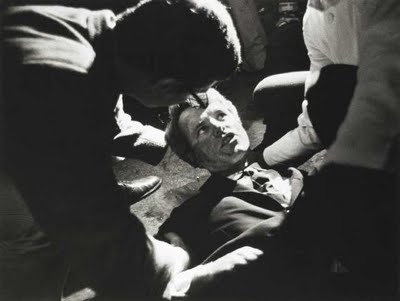 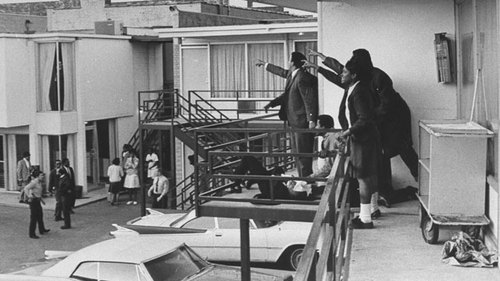 And deeply disturbed by the disaster that was occurring in Vietnam; 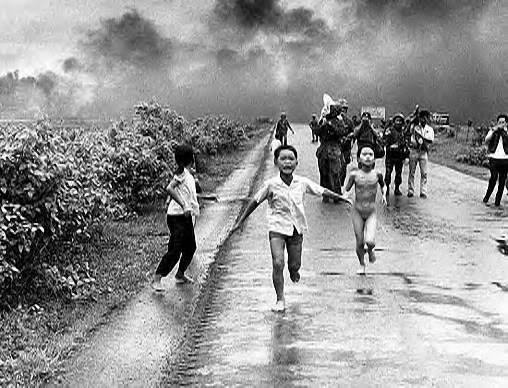 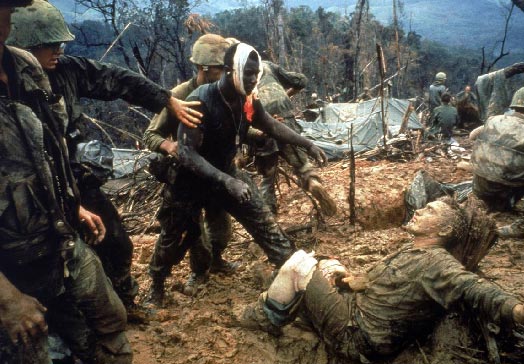 The discoveries of the Watergate hearings were the last thing the American public wanted to hear. 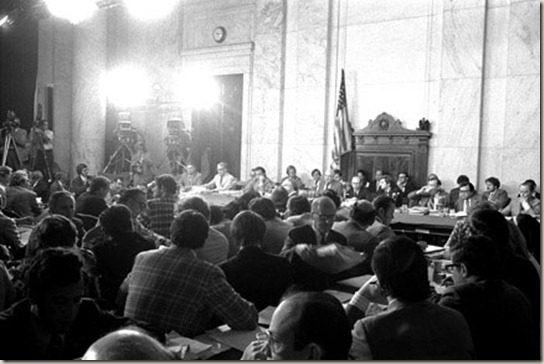 It was at this time that the American public looked to a positive distraction to alleviate the pall that was engulfing their nation.

Not for the first time, a nation found that distraction in a racehorse.

Just like the Australian public rejoiced in the feats of Phar Lap during the darkest days of the Great Depression; 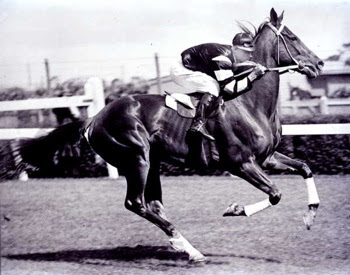 The American public, for a few weeks in May and June of 1973, revelled in the feats of Secretariat - with little doubt, the greatest racehorse of all time.  Who, like Phar Lap, was coincidently nicknamed 'Big Red'. 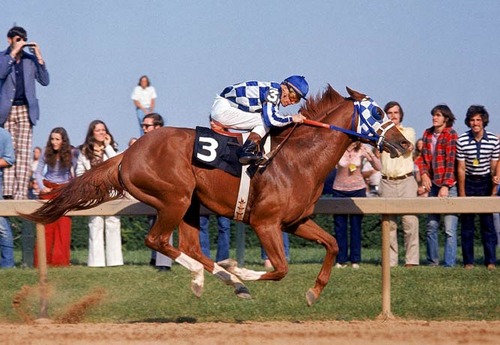 Only 11 horses have managed to achieve this honour in 138 years.

On May 5 1973, Secretariat won the first leg of the Triple Crown, the Kentucky Derby, by two and a half lengths and in a record time (which still stands today) at 1.59.4.  Amazingly he ran each successive 1/4 mile (400 metre) sections of the race, faster than the previous one. Which meant he continued to accelerate as the race progressed. An astonishing feat.

"I was at Secretariat's Derby, in '73. . . That was...just beauty, you know? He started in last place, which he tended to do. I was covering the second-place horse, which wound up being Sham. It looked like Sham's race going into the last turn, I think. The thing you have to understand is that Sham was fast, a beautiful horse. He would have had the Triple Crown in another year. And it just didn't seem like there could be anything faster than that. Everybody was watching him. It was over, more or less. And all of a sudden there was this, like, just a disruption in the corner of your eye, in your peripheral vision. And then before you could make out what it was, here Secretariat came. And then Secretariat had passed him. No one had ever seen anything run like that - a lot of the old guys said the same thing. It was like he was some other animal out there."

You can see the 1973 Kentucky Derby here

Two weeks later (May 19 1973) in the Preakness Stakes, Secretariat again started the race last, but at the first turn he moved around the outside of all the other horses to go from last to first with an explosive turn of speed, or as an Australian race caller might say:

"He went past them all like they were nailed to the fence."

The American race caller of the Preakness Stakes described it this way:

"But here comes Secretariat, he's moving very fast, he's going to the outside, he's going for the lead and right now he's looking for it"

Secretariat went on to easily win the race.  Again by two and a half lengths, again in a record time of 1.53, and again a record that still stands today.

You can see the 1973 Preakness Stakes here

By now the American public had gone Secretariat mad.

In the week of the running of the final leg of the Triple Crown - the Belmont Stakes - Secretariat was featured in a multitude of TV news bulletins and appeared on the cover of Newsweek, Time and, of course, Sports Illustrated.

"We had an overwhelming number of requests for [press] credentials.  People that had never seen a horse race, that were in the newspaper business, wanted to get up close and see this horse.  It was really a frenzy of interest."

Jerry Izenberg of the Star Ledger:

"Before the race, you could see, not only what Secretariat meant to really hard boiled step over a guy with a heart attack so they wouldn't get shut out of the window bettors; but people who weren't bettors, who were there with their kids because it was Secretariat.  This was the people's horse."

"I was there at six o'clock in the morning [on race day].  I was there all night.  I fell asleep against a tree, by his barn.  The fittest I had ever seen a horse.  His eyes were big as saucers, his nostrils were flaring, he was nickering, his ears were playing, his muscles were rippling, and he's walking around on his hind legs and I remember thinking to myself 'Boy, what are we going to see today!'"

Secretariat didn't disappoint the American public in the Belmont Stakes:

"Only four horses competed against Secretariat for the June 9, 1973, running of the Belmont Stakes, including Sham, who had finished second in both the [Kentucky] Derby and Preakness [Stakes], along with three other horses thought to have little chance by the bettors: Twice A Prince, My Gallant, and Private Smiles. Secretariat was sent off as a 1–10 favourite to win. Before a crowd of 67,605, Secretariat and Sham set a fast early pace, opening ten lengths on the rest of the field. After the six-furlong mark [1200 metres], Sham began to tire, ultimately finishing last. Secretariat continued the fast pace and opened up a larger and larger margin on the field. CBS Television announcer Chic Anderson described the horse's pace in a famous commentary: "Secretariat is widening now! He is moving like a tremendous machine!"

In the stretch, Secretariat opened a 1/16 mile (100 metres) lead on the rest of the field. At the finish, he won by 31 lengths and ran the fastest 1½ miles on dirt in history, 2:24 flat, which broke the stakes record by more than two seconds. This works out to a speed of 37.5 mph (60 kph) for his entire performance. Secretariat's record still stands [yet again]; no other horse has ever broken 2:25 for 1½ miles on dirt. Bettors holding 5,617 winning parimutuel [TAB] tickets on Secretariat never redeemed them, presumably keeping them as souvenirs (and because the tickets would have paid only $2.20 on a $2 bet)." [Wikipedia]

You can see that extraordinary 1973 Belmont Stakes here

Secretariat winning the Belmont Stakes, and famous photo of jockey, Ron Turcotte, looking around to see where the rest of the field was: 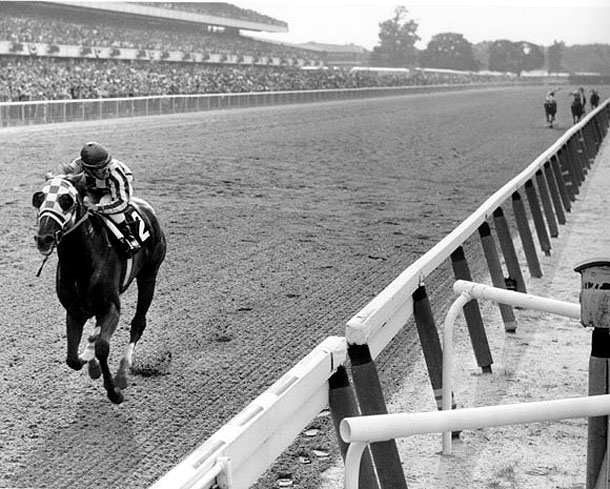 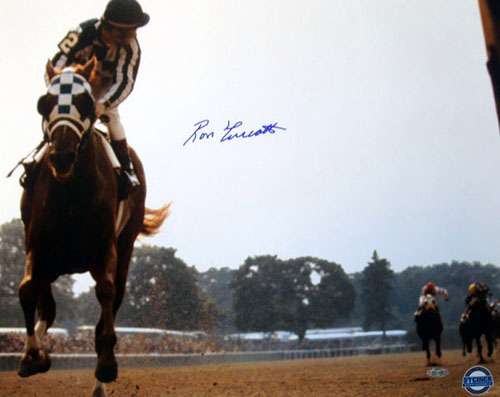 George Plimpton of Sports Illustrated explained the phenomenon of Secretariat this way:

In May and June of 1973, the United States was bleeding from its soul.  Secretariat, for a time at least, was able to help the country forget its woes.

He was indeed not only a champion, but the horse that soothed a nation.

There is no balm that so well soothes, as a champion steed with four fast hooves.

Posted by Andrew Catsaras at 14:45